The South East Makerspace is located right in the heart of Waterford City. 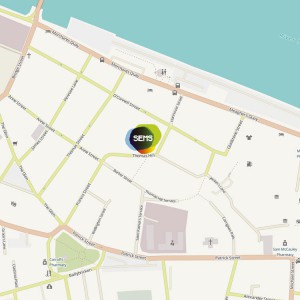 A short walk from the Bus Éireann bus station on Waterford Quay’s.

Dublin Coach operates an ‘M9 Express’ from Merchants Quay, near the Granary. From Spring 2016, the same company operates to Cork (St. Patrick’s Quay) and Dungarvan via the N25.

Alternative Dublin services are provided by J.J. Kavanagh And Sons. Their services operate via the Quays with the Dooley’s Hotel stop being the nearest. Services continue to/from Parnell Street (7-10 minute walk) and further afield to Tramore.

The N25 Rosslare – Cork road now bypasses the City; also Waterford is the terminus of the M9 and national route N24

Various private car parks are located on The Quay and further up Thomas Hill, for rates less than €5/day

Waterford’s railway station is located on the opposite riverbank and is a short walk across the bridge to Thomas Hill (8-10 minutes).

All services are operated by Iarnród Éireann

Although Waterford was once a substantial rail hub, it is now the terminus of the line south from Dublin Heuston. Intermediate stations include Kildare Town, Athy, Carlow and Kilkenny. Infrequent services operate to and from South Tipperary on the old Rosslare to Limerick line. There is no direct service to Cork.